For an upcoming project I needed to use a uBlox GPS. Specifically, I had to use it with the Raspberry Pi, not an Arduino in Airborne mode (hmm hints about the project? :P) Even though the documentation is very informative, it still lacks a "quick start" guide for us noobs. Even though many blogs have guided me in using this module, I still had to command the GPS to work < 50,000 m (Airborne mode) and had to adjust different configs.

I'll be using a uBlox NEO-6M GPS module for this guide, but any uBlox 6 GPS would work just fine. 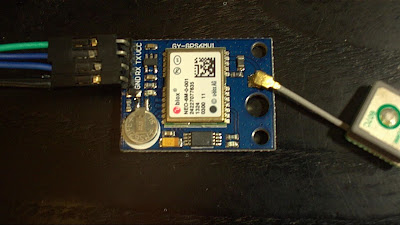 The first thing you want to do is connect the GPS to your Pi. The wiring is simple:


Once you have made the connections, we need to enable the Pi's serial comm.

Once open and remove 'ttyAMA0', to have this:

Once you have that use Ctrl-O and Ctrl-X to save and exit.

Then edit the inittab file by:


Once open find the "Spawn a getty on Raspberry Pi" line, and put a # before the line just after that. Restart the system.

Install GPSD by typing in:


Then start the serial port,


And then display it,

To allow the GPS to fix and give you a location, go outside or find a place with a clear view of the sky.

Install two python libraries, pyserial and pynmea (I suggest you use pip, it is just easier to use that)

Once done, create a new *.py file. anywhere you want. Make sure you don't create the file as root.

Start the X GUI (startx) and open up the python file in IDLE. And type this in:


What the above code starts a serial port, keeps on reading data until sigint and parses the NMEA strings  into Latitude, Longitude, Altitude and # of satellites.

What if you want to initialize the GPS in Airborne mode?

Create a new *.py file and open it. Type in:

The weird hex string tells the GPS to initialize in airborne mode. Here is a list of some commands:

All you have to do is, replace each space with a '\x' and add a '\x' in the front and you are good to go.
These are essentially binary messages and are according to the UBX protocol.

If you want to adjust more settings, download the u-center software. Go to View>Messages View

Expand the UBX node and the CFG node. There you have it. Click on any of the child nodes, adjust the settings to want and copy the hex message in the textbox and send it over to uBlox using python.

I hope this helped someone, if I missed anything please let me know or if you have any questions feel free to ask me. Hope I saved you a few google searches. And as always,